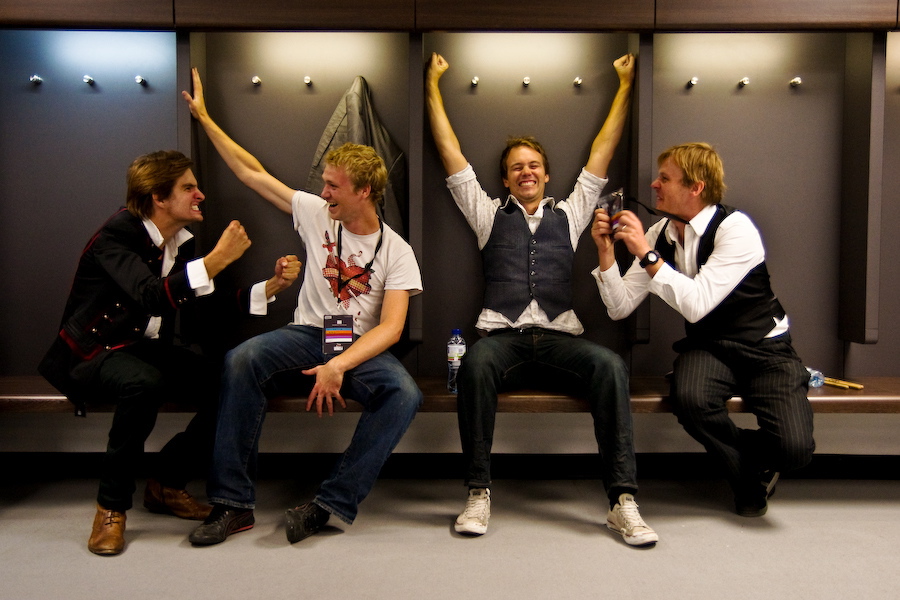 Today, The Explorer Mag got the chance to interview The Lightyears ! I am very happy to introduce this amazing pop rock band from London, UK : George Owens, Chris Russell, John Owens and Tony Lyons. These guys have an incredible sense of humour and great projects for the future ! With many years of experience, the band has acquired a enormous amount of fans, wrote the London Olympics’ song “There With You” that was performed at the Peterborough leg of the Olympic Torch Relay and keep delighting people’s ears with their great music. Chris, the pianist of The Lightyears who is also an excellent writer, has been working on a novel based on the band tour diaries called “Mockstars“. You will find a video sample at the end of the interview. Smile guaranteed ! Beware : After having listened to their music, read this interview and watched the “Mockstars” sample, you will most likely want to buy a ticket to London to see them live. Please do so.

1. Could you introduce yourself and tell us about how you met as a band?

George (lead vocals / guitar) and myself (piano / backing vocals) met when we were thirteen. We were both obsessed with Bon Jovi, and formed our own band after seeing them perform live at Wembley Stadium. We had this idea that being in a band might win us more girlfriends, and perhaps one day even get us to Wembley Stadium ourselves – which did actually happen a couple of years back! So, essentially, The Lightyears are a school band turned ‘grown-up’ band. We’re friends, and in some cases, brothers (our bass player John is George‘s younger brother). We’ve also known our drummer, Tony, since we were at school. We all go back a long way.

2. Other than the people you’re with now, if you could get any musician (living or dead), who would be in your “dream band”? Are these artists your main musical influences?

I’d like to do a duelling piano thing with Jerry Lee Lewis, or Little Richard. Those guys are where it all started! A lot of people think rock ‘n’ roll is all about guitars, but it actually began on the piano (mind you, as The Lightyears pianist, I probably would say that!). As a result I’m a big fan of artists like Ben Folds Five and Billy Joel, as are the other guys. I think you can definitely hear their influence in our music.

3. How would you describe (in 5 adjectives) your music for people who never got the chance to hear it?

Uplifting, soaring, heartwarming, melodic, bittersweet. If this isn’t overly grandiose, we’re sort of the musical equivalent of The Shawshank Redemption. The kind of band you put on the stereo on a wintry Saturday afternoon, in front of a roaring fire (possibly with a labrador), and feel simultaneously comforted and moved.

4. What messages and stories are you trying to convey through your songs?

The album we’re currently working on is principally about change. Change, growing up and dealing with the constant ebb and flow of life. The message in those songs, ultimately, is that change might not always be what you expect, but accepting its inevitability can be incredibly liberating.

5. You performed at the willow festival in Peterborough in July and were recently on tour. What are the best memories that you keep from your public performances and your fans (crazy fans, love letters, etc…)?

I think the most surprising thing a fan ever did was approach us at a gig in Asbury Park, New Jersey, with a framed photo of the band inside a heart-shaped union jack ribbon. She’d made it herself. She was very sweet – she said she’d been in a deep depression for decades and one of our songs had lifted her out of it. We were kind of taken aback, but I guess moments like that are what it’s all about.

6. Chris, you have been working on The Lightyears novel called “Mockstars” (truly brilliant !) and you were signed up to literary agent Ed Wilson (Congrats!). Could you tell us a little more about this project?

I’ve been writing tour dairies for the band for years, ever since we first performed internationally back in 2006. A few years ago George suggested I turn them into a novel and, as I have a history of doing exactly what he tells me, I did…! The novel isn’t a memoir exactly – more the band’s ‘creation myth’, inspired by our tour stories. I often refer to it as ‘an uplifting tale of debts, mugs and rock ‘n’ roll’. We’re also planning to release an album of music to accompany it, which is exciting. Since I signed with my agent things have started to move forward more quickly, and I hope to have more news soon!

– George : How many posh groupies did you have to face while being on tour?

Beware – Chris has exaggerated the posh groupies for the purposes of his novel! You see, I’m only in it for the music. Honestly. (Also, my wife might be reading this.)

– Chris : Which conditioner do you use? (You raised the question, now I’m curious)

TRESemmé. It’s salon-recommended. Apparently it also gives your hair Platinum Strength, which will be handy if I ever need to open a bank vault with my quiff.

– John : Your friends say that you can sing but don’t dare to do so : What’s your favourite song to belt out in your car/shower/bedroom, at the bar ?

Anything by Weather Report. I also like to try and emulate the sound of John Coltrane’s saxophone solos with my lips. But the world will never hear this.

– Tony : Which quote would best describe the philosophy of the band according to you?

“Never let the truth get in the way of a good story.”

8. Where do you find inspiration and what would be your best advice on how to compose a song?

Most of the songs I’ve written for the new album are actually about my friendship with George. We’ve managed to stay best friends – and keep a band going – since we were kids but, equally, growing up brings great change and that’s not always easy to deal with. As for my best advice on composing a song… well, mainly, I’d say don’t think, just write. Artistic ideas need to be crafted and honed but, at the beginning, just create. Don’t be constrained by your inner critic. Come up with as many ideas as you can – even the best songsmiths in history have written a hundred terrible ideas for every good one.

9. Did I miss any question? How would you reply to it?

All looks good to me!

10. Is there a fun anecdote about you that you fans don’t know and would be surprised to hear?

Some of our fans probably already know this story, but it’s a good one so I thought I’d include it. A few years back we were on tour in South Korea, playing a big society event called The Queen’s Birthday Ball. The theme was “The Great British Seaside”, and the organisers asked us if we could sing a set of barbershop numbers to open the night. Forgetting that we don’t really know the first thing about barbershop, I agreed, and they said they’d get some costumes made up for us. Upshot is, come the gig we were stood on the end of a full-size replica of Brighton Pier dressed in red and white striped suits and straw hats singing “I Do Like To Be Beside The Seaside” in the barbershop style in front of an audience of 700 people that included Her Majesty’s Ambassador. We looked quite ridiculous (here’s a photo). After that happened, we decided to draw up a list entitled “Things The Lightyears Won’t Do For Money”. The list remains blank.

Here is an extract of the Mockstars novel by Chris Russel :